Author, Poet and Artist Yasus Afari has secured a tour deal with Denmark based company, Jam Yard Promotions, which will see the Ambassador of Rastafari doing a unique Europe tour in 2015.

The tour is unique because not only will Yasus Afari be performing his music and poetry in various venues across Europe, but he will also be speaking at several schools as he is expected to educate patrons on the Rastafari culture and lifestyle.

The tour is titled “Roots Reggae and Dub Tour” and it kicks off on March 25th and runs through to April 29th 2015.

Yasus Afari will be showcasing his “Public Secret” album as well as his “Overstanding Rastafari – Jamaica’s Gift To The World” book.

Societies and communities are increasingly and rapidly becoming more pluralized and urbanized due to a combination of factors such as the urban drift, generational divide and social decline. These forces all take their toll on the social fabric and if they are not arrested, reversed and rehabilitated then the social order is destroyed. These negative forces are even more prevalent when they operate within oppressive systems of historical exploitation and injustice. Against this background, indigenous societies, communities and nations are more at risk and are less likely to heal themselves and be accorded the dignity of self determination.

People of African descent who are still emerging from the yoke and inhumanity of chattel slavery are particularly challenged in their bid to grapple with the social forces of decadence and decay. Our people of the Caribbean are naturally caught up in the Trans-Atlantic turbulence of social turmoil

When the prevailing attitudes, attributes, social values and graces are being eroded then there is an urgent need to reset the collective and individual mind set. This difficulty is compounded when those prevailing social norms were imposed by brutal colonial forces of inhumanity and genocide. Therefore the people of the Caribbean are in urgent need of a social re-engineering which is been dubbed Operation Calibration.

The language and culture of a people are inseparable. Therefore, languages and cultures must become critical tools of the reconstruction of our communities. Arts in education, socialization and nation building must be a top priority in this process of social re-engineering. Poetry is one of the arts which has this unique ability to effect social calibration and recalibration.

We have declared 2014 - The Year of The Poets. This simply means the Poets, Dub Poets, Performance Poets, Spoken Word Artistes and all creative artists shall be further challenged and must be empowered and inspired to dig deeper and set higher goals. In so doing poets shall  be committed to be more be more unified to network more and to be more accessible as well as to access more resources in order to achieve, enhance and maintain the social responsibility, vigilance and purpose of Poetry and the creative arts. Evidently, the arts, the poets and the artists must be empowered to be proactive agents of social harmony and positive change. The technique of edutainment is indespensible in this exercise.

Yasus Afari has been one of the artistes at the fore front of the effort of social intervention, renewal and transformation through the application of the Edutainment Technique. This commitment is based on personal awareness of purpose and shared social responsibility.Consequently,the Edutainment Promotion Team is delighted to announce that Yasus Afari is now a fellow of the New Earth Institute, a nominee of the 2014 UN Fellowship for People of African Descent and a short listed nominee of Poet Laureate of Jamaica.

The 11th annual staging of Poetry in Motion, another brain child of Yasus Afari, shall be staged at Manchester Golf Club, Mandeville, Jamaica on Sunday February 23rd and provides further evidence of the possibilities and potential of the arts and edutainment in the process of social renewal, social harmony and social transformation

The Public Secret album was produced by Senya-Cum and Mandeville Music Group and was recorded, mixed and mastered in Jamaica by Dub Vijan Band at the Mandeville based Shelta Recording Studio and distributed world wide by the Digital Distribution and Marketing Company, Fox Fuse, of Manhattan, New York, USA. Physical distribution is also handled by Fox Fuse in the USA. Plans are in progress for a European and world wide distribution of the physical CD.A Japanese company will distribute the Vinyl album in Asia.

Remixes are now  being done for three tracks from Public Secret as well as other earlier releases by Yasus Afari in combination with other iconic reggae artistes.

Public Secret features 15 original tracks including the digital hit single 'Wine Pon Paper' and the follow up single 'Poetree Caan Nyam'. The album will be available at the Yasus Afari Live in Concert on October 5th at the Red Bones Cafe. Advanced tickets are available and can be redeemed at the gate for a Public Secret CD and free entry to the show. Otherwise, patrons can pick up their limited edition CDs at the gate and enter free. Kindly see the attached flyer

The Yasus Afari Live Concert will feature two segments, the first of which will feature hit songs from Yasus' extensive and intriguing catalogue while the other will feature songs from the hot, new international Public Secret album such as 'Wine Pon Paper', 'Poetree Caan Nyam', 'Woman to Love' and 'Lets Talk New York', among others.

The desire for social responsibility, public awareness informed and inspired the aptly titled Public Secret album so the public can come prepared to be informed, empowered and inspired at Yasus Afari Live in Concert With Dub Vijan Band... It's a Public Secret Affair...See you there, at Red Bones Cafe on Saturday October 5th at 8pm.

Bless it & Set it 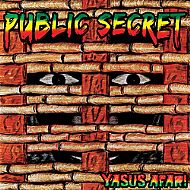 With 15 tracks and ten original one drop reggae selections along with five dub versions of selected songs and featuring: "Wine Pon Paper"

Check this news item on the release of "Public Secret":

Here are the purchase/pre-order links to the album "Public Secret":