When you talk about suceess and deep conviction you have to talk about a dub poet by the name of Yasus Afari. Born "John Sinclair" in a small village in the parish of St. Elizabeth, Jamaica, where life was hard and every day survival was a struggle. His mother was his only inspiration after his bigger brother left home to join the Police Force.

He always mentioned how is mother used to pray and encouraged him to work hard so that they could lead a better life. He passed his common Entrance exam and went off to St. Elizabeth Technical High School. He did excell and was a major influence on his peer group.

After STETHS he went on to work with the Jamaica Telephone company as a repair Technician but soon find out that there was more to life than climbing telephone poles. He won a scholarship to the College of Arts Science and Technology where a whole new world open up. At college he majored in telecommunications and was a revolutionist against how the system was administered. He participated in all aspect of student life and was a role model for all the students in that era. He was elected Vice president of the Student Council but was denied to serve because of his positive and anti comformative values.This was a major awakening for him and he did some soul searching and that is when he knew he had the calling to do good for the masses. He vowed that he will fight the injustices of the society and bring about conciousness to all the people that would listen to what he has to say.

The social and political climate during this time was rough. Maurice Bishop got killed in Genada, Bob had just died, and so much was happening in the political arena that most youths were looking for a concious vibe. Yasus began doing concerts at the local students union, The University of the West Indies at Mona, The Nursing School and Teachers Colleges. The response was like a shock wave and everyone was taking about Toni Taam as he was fondly called then. He did a several shows with then up coming stars as well as established Artistes.

His first song was realeased in 1986 during this time Yasus went into a period of meditation and isolation while writing consistently.

Yasus began to emerge and by joining partnership with other up coming artist he began to see a light at the end of the tunnel. He met up with Garnet Silk, who was also is childhood friend, and they began to work on a few songs together. On one of his birthday's he was hanging out with Garnet and he wrote the first line of "I can see clearly". Garnet went on to finish the song and also wrote "I saw Zion........." All this led to a tighter relationship with Silk that gave him the inspiration to write "Nothing can divide............" Yasus and Garnet still have unproduced songs laid out on tracks, to be published when the time is right.

Things started to look up and Yasus teamed up with Maxi Priest to write "Work" which appeared on his "Dance Hall Baptism" (Senya-Cum/Ras Records). Mental Assasin was done on Tappa Zuki label. He has since then recorded with a whole host of musicians including Everton Blender, Black Uhuru, General Degree, Tony Rebel and more who he has also produced. The achievements go far and wide and he was awarded Dub Poet of the year in 1993 in a controversial decision. At the ceremony the award was given to the well known Mutabaruka. Muta refused to accept this award and made it explictly clear that it should be given to Yasus. Yasus went on to win more awards and was also honored in Chiago by Martin International for Dub Poeb of the year in 1994 and Yasus was honored many times by the Jamaican Music Federation. The list of recognition goes on and Yasus always says it is a great honor to recognized for all his work. 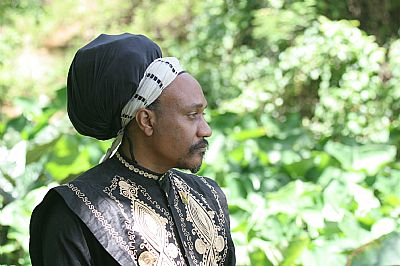 Touring with Black Uhuru, Yasus was creating a cultural revolution on a world-wide basis, starting in the US covering 26 States and the Pacific Islands. He was also in Brazil where the fans open heartedly responed to his message. A man can only be king in his home land but it seems as if Africa is his own land. Coming off a tour in Africa he was literally crowned King in Ethiopia and Ghana . He is invited as the guest of honour for the Ghana independence celebration . "Honour Crown HIM" was the number one single in Zimbabwae for months.

During this time Yasus also featured in many press features including gracing the cover of the Billboard Magazine.  He also managed to produce his own music as well as that of other artistes and promoted several ground breaking and successful stage shows.

YASUA AFARI's main showcase is "Poetry in Motion" which is an annual event celebrating Jamaica's poetic heritage and now the brilliant concept of the annual Jamaica Poetry Festival..

What people say about I&I :

"YASUS AFARI represents the immortal vision of the ancient future, stimulating the revolutionary will to conquer poverty, ignorance, and injustice, by releasing positive vibrations in harmony with words, sounds and power. Deeply rooted in his Rastafarian beliefs, Yasus Afari is one of Jamaica's national treasures".

"Yasus Afari is a Dub Poet, Author, Philosopher and Reggae Artiste of unprecedented insight and inspiration, and international renown. This international reggae/Rastafari ambassador has received numerous awards and accolades, and has been featured by many publications, including Billboard Magazine. He produces his own music as well as tat of other artistes and has produced several ground breaking and successful stage shows. His annual poetic showcase is called "Poetry in Motion" celebrating Jamaica's rich poetic heritage".
Groundings - St Michael's Theological College - July 2011