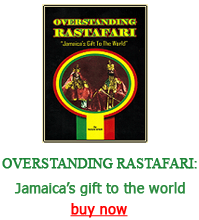 Yasus Afari took time out to research and write his best selling book "Overstanding Rastafari: Jamaica's Gift to the World" as a follow up to work he has developed in Jamaican schools as a "Culture Agent".

The book was launched at the University of the West Indies in April 2007 and Yasus Afari started to tour the world promoting the book. This book is used in schools and universities around the world as one of the few comprehensive texts on Rastafari written by a Rastafarian.

email: edutainmentpromo@yahoo.com to purchase your copy of this best selling book

Seven years ago, Rasta reggae poet Yasus Afari decided to write a book about his Faith. He'd been working in schools in Jamaica using Edutainment – the merging of entertainment and education – as a means to communicate with the youth. Then he hit upon the idea of using Rastafari to teach Caribbean history. Writing in longhand it took him five years to finish Overstanding Rastafari: Jamaica's Gift to the World. The response the book has received in Jamaica (it sold out after just four weeks) and internationally has, he says, helped unite the Rastafarian movement. Calabash caught up with him recently to find out more about the book and the concepts behind it.

Why did you decide to write the book?

I think that once you are a part of a community, Rastafari and the Jamaican community in my case, you have a responsibility to seek to understand that community and the people with whom you co-exist in that community.

It seems strange that a book like this has never been written before.

There are other books out there but most are written by non-Rastas. There is not another one with the comprehensive overview we have attempted to achieve here. There is not one that lends itself readily and well to the concerns and subject matter contained within my book. Not one that speaks to the Rasta community and in the same breath wider communities.

What would you say is the main point of the book?

The main point of the book is really tolerance, overstanding, seeking to overstand and to be overstood as a social being. It is not really laced with Rasta jargon – but the thinking is we all share the same breath of life. At least we have that in common, let us base our thinking on even that one premise and work the others our.

Who is the book aimed at?

Certainly the youths. Life is like a relay so we have to understand the role of the youths and we need to invest in them if we want to change things. But I am speaking to other Rastas too as we want to inspire a period of introspection. Really anyone with an interest in Rastafari and Caribbean and African-Caribbean history generally should read the book.

It is very comprehensive. Did it involve a lot of research?

I like to think that in-search started before the re-search. There was a journey from within. I did then check what other people think and have said about Rastafari. But what gave it direction was His Imperial Majesty Haile Selassie I. I used his utterances and teachings as the reference and standard of measurement. I must admit it was difficult at times. I remember at one point I was working on it for twenty-three hours one day, eighteen hours the next. I remember thinking blood fire... But I knew I had to continue.

How did you find the process of writing?

Challenging. Especially deciding the tone I would take. I initially wanted to take a passionate testimonial approach to the writing. Then I decided I needed to take a scholarly approach. In the end organically I think I got a balance between the passion and the objectivity. I did need to be honest to my own heartbeat and the Rastafari family.

Another challenge was being frank and honest and using the book as an instrument for unity and harmony. There has been little controversy within the Rastafarian community over its publication which is good.

You have had wide-spread support?

The University of the West Indies absorbed the cost of the launch. The Jamaican Bicentenary Committee were involved. Digi-Cell were sponsors and many others. I included in the book that His Imperial Majesty Haile Selassie I made in Jamaica in 1966. That speech is now framed and hangs in the Jamaican Parliament.

With your talk of major sponsors and government support would you say Rasta is mainstream now?

Yes and no. The best way to weaken any minority or revolutionary movement is to assimilate it. We are aware of that. But we are aware that we really need to roll out the so called 'frightening' elements of Rasta while keeping the revolutionary spirit alive. These days you have people wearing locks as a fashion statement or at best a cultural statement. But certainly the issues that Rastafari has been associated with are clear and more relevant than 70 years ago when the movement started. Reparations and repatriation are still key issues crucial to the sustenance of our civilisation. So I don't see it as mainstream, but it might have lost some of its revolutionary in-your-face zeal. That said, Rasta is still growing and still maintains its form; I hope my book will contribute to that.

Some say that Islam is the radical religion now.

Rastafari is the epitome of black theology and revolution. No insult to Muslims or Christians but if the history of the African community be told we have suffered at the hands of Arabs and Christians. Those two religions are associated with the gang rape of Africa. So true revolution must come through Rastafari. It's not about competition but analytical and scholarly deduction.

You are world renowned as a dub-poet, when did you start writing poetry?

At school I was asked to write a poem for a class project. I wrote a poem called The Travelling Sun. I read it to the class and from the response I got I knew it was a good poem. Then at college I was hosting an event and decided to recite a few of my poems. I became an instant campus personality.

When did you start recording?

At the end of the eighties. My fifth album, Revolution Chapter I was released recently. I tour with Black Uhuru and often record with them. To date I have toured around 35 countries. I recently toured Australia, New Zealand and Japan...

Japan? For some reason that surprises me...

Jamaica's culture impacts on the whole world. Language isn't a barrier to cultural expression. I did a stage show in Japan of 40,000 people. You've have thought you were in Jamaica. Rasta and reggae are universal.

Portrait of the Author: YASUS AFARI

As the celestial elements prevailed, an elderly couple travailed and laboured giving new life to a being as ancient as time immemorial. This event occurred at the dawn of the sixties in a mud house during a thunderstorm in the rustic hills of Rose Hall, in South East St Elizabeth, Jamaica.

Yasus Afari, meaning "Gift of Vision", was slow to speak in his early years and his concerned mother fed him from a gourd (calabash) giving him the power of speech.

Yasus had a penchant for music and poetry even as a child and by the time he was ten years old he had begun playing on cans and chanting to 'his music'. While growing up Yasus developed a keener interest in poetry and music and was known to recite poetry with passion and remarkable fluency. His love of poetry and music became his private fountain of energy and this interest inevitably fashioned his unique and inimitable style.

Yasus Afari skilfully shares his views encompassing then, now and in our ancient future. He works tirelessly to bring together peoples from the many backgrounds of our diverse world. He uses the insight of Rastafari principles as an example of a way of crossing the barriers that can create fear and hostility. Yasus is exceptionally capable of explaining his personal Rastafarian views and his profound Faith in Jah and he is able to articulate how he sees this as an indigenous response to the experience of slavery that was the 2007 focus of the Bi-Centenary of the Abolition of the Trans-Atlantic Trade in Africans.

In view of his global outlook, Yasus Afari represents the immortal vision of the ancient future, stimulating the revolutionary will to conquer poverty, ignorance and injustice, by releasing positive vibrations in harmony with words, sounds and power.